language in readable and traverse chapters/sections. It it a 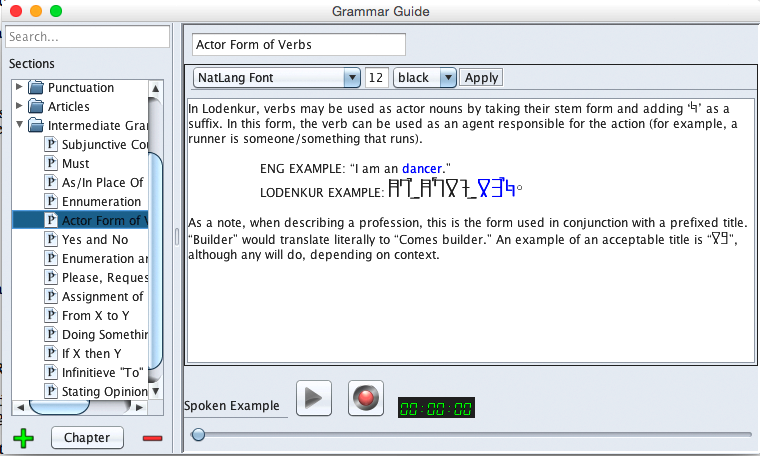 This window is among the more complicated aspects of PolyGlot, but additionally

probably the most effective.

Around the left may be the chapter and section tree. By clicking the Chapter

button, a brand new chapter is added underneath the presently selected position.

Chapters can’t be nested. The + button adds new sections towards the

presently selected chapter. The – button deletes an instalment or section.

The name field enables you to definitely name your chapter/section.

be modified by highlighting text, altering the from the font menu

over the text box, and clicking Apply. In case your language uses RTL

writing, it’ll display as a result here whenever you select your conlang’s

font within the font dropdown.

your conlang. This is particularly helpful whenever your language uses

particular tones or inflections that it’s hard to describe in

Approaching Features (not so as of

All approaching features is visible here. If there is a feature you want to see, you can create

a brand new ticket for this here!

Current listing of all bugs and issues here: https://github.com/DraqueT/PolyGlot/labels/bug

The next sites are fantastic for creating your

own fonts to be used within PolyGlot, and all sorts of fonts produced together

feature). The custom font for Lodenkur, Kukun Straight line A, was produced

with Fontstruct, although future versions will probably be produced with

Is Chinese a Real Language? (Languages of the World Episode 7)

linus hermansson: You got the Opium War wrong actually the British wanted to sell opium to The Chinese but the Chinese made opium illegal﻿

The Polyglot Files: Thank you!﻿

Steven Nehr: It is kind of like India. There is no such language as Indian. While Hindi can be translated as Indian, it would still be ignorant to call a language Indian.﻿

Steven Nehr: you're welcome. My father's side is Pakistani, so in which case I have some knowledge of that. I have an interest in languages my own self. it is good to see that there is not as much stigma around mandarin/chinese as there is around hindi/urdu.﻿

Memester Mc Memes: Why do some people have a hard time understanding this?\nI've had to explain this to some people multiple times and they just cannot grasp the idea that India and Pakistan have more than one ethnic group and that some of those ethnic groups speak different languages. I don't mind explaining it to people, but it does get kind of old when I've had to explain it to the same person more than once.﻿

Renee Wang: Hello, thanks for the great video! \nNative Mandarin speaker here, and I also acquired Cantonese later in life. As for other regional languages, I don't speak much, but if I listen to them attentively (like with 100% concentration), and be given the right context, I probably would be able to make out 15% of it, but if these conversations are transcribed in written Chinese characters, it is very likely I’d be able to understand 70%, if not more. \nI agree that Chinese should rather be described as a language family, this being said, I however am not fully satisfied with the current linguistic binary categorizations (language vs. dialect), as it doesn’t fully recognize the uniqueness of Chinese, and its intelligibility. Going firstly back to your example, “table”, the character in Mandarin you referred to was “表 " as in “time table （时间表）” whereas in "dining table （餐桌）" the correct Mandarin character should be "桌", and the character in Cantonese "枱“ is the simplified form of the traditional writing "檯", which has a meaning as a kind of "桌“, so there exists the intelligibility, even though the character "枱” or “檯” is very rarely used in Mandarin (at least in Mainland China, but I do think in Taiwan Mandarin “檯” is still in use).\nAs for the second example, "my name is", to the eyes of non Chinese speakers, these writings are a lot different, however I am sure when presented to a Chinese (native Mandarin or Cantonese) speakers, at least 2-3 out of 5 would make out the sense of the writings as in "my name is…", even they cannot at all pronounce it in the other language/dialect. As for the Shanghainese writing, "吾“ is actually an ancient use of ”我“ (the pronoun I in modern Mandarin), and "吾叫” is literally interpreted as "I am called…“, therefore to a set of Chinese eyes, "吾叫" equals "我叫"， and when compared to "我的名字是…", is like a Frenchman reads "Mon nom est…" vs "je m'appelle…" so again, despite of the difference in writing, it is still intelligible to a certain degree. You are right, phonetically, they are very different, and because of the difference in exposures to external cultural influence, the linguistic evolution rate differs and the manner of speaking varies as well.\nA side note though, the characters cannot be simply equated to alphabets, for one reason, it is the quantity, and the second reason is the functionality of characters is very different.\nSorry for my long comment, hope it helps :)﻿

The Polyglot Files: Thanks for clarifying all that, and thanks for watching! It's always useful to have real-world experiences (and corrections) as I often do not speak these languages myself :)﻿

Renee Wang: I really enjoyed your videos, keep up the good work!﻿

Iker Berasategui: It's just like "Spanish" the real name of the language is Castilian (castellano), originally from Castile (central/northern Spain), we have more than one language.﻿